Making it our own,

Though the Villa itself was in good condition, the furniture and things in it were not to our taste. So we started to make a list of all the things we would like to renew to make it our own. And after a few hours we realized the list would be a little longer than expected.

To be able to give the Villa interior a more contemporary feel and look almost everything had to go, that was a little set back but nice to start from scratch to really give it our personal and more modern touch.

So first we took all of the things that did not fit in to our plans out, some pieces of furniture were really not suited in the more contemporary style of furniture we had in mind and had to be replaced, in order to get where we wanted to go. 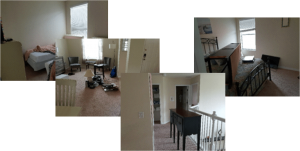 After a little while we realized the word “some” furniture we wanted to renew became a mountain of furniture, and other things we would like to renew.

Removing things is one thing but there is also the part of reinstalling new items and disposing of all the cardboard boxes they are delivered in.

At some point we had to take a huge dumpster in to be able to do just that.

A fresh start of the Villa was well underway, so painting was the next step.

This was one of the last things we could do because of the timeframe, new guests were coming, so we had to leave the rest for December.

The final touch,  the game Garage and the pool area,

We decided to renew all of the game equipment and liked to add a theme to the Garage. The theme was easy, we only had to combine the two functions of the room, Games and Garage, so the theme was born,

First thing to do,

and give the room a garage feeling by putting up signs and license plates of all the states we visited during the years we spent our vacation in the US.

So, a job well done, and on to the next point on the agenda, the pool area, we were not too fond of the tube and rotan furniture so that was an easy decision to get new pool furniture in.

Alltough not yet completely done this is the style we are going with the pool deck, we only plan to add a loungecorner with two chairs in the same style as the new lounge beds on the pool deck.

But this has to wait for April to be finished. At this point we had a few days left to enjoy the reborn Villa and Orlando in Christmas time.

So we did just that and more because the Villa did not came with Christmas decorations , we had to shop for them.

It feels kind of strange to go christmas shopping at 25 to 30 degrees celcius. But the final results are just as rewarding, even without the snow you might expect in December.

At this point it is time to do a little Christmas sightseeing in the Neighbourhood of Mount Dora and Disney springs.

Though not yet ready for the whole one hundred percent we do feel all the hard work has paid of and we are now in the position we like to be and really able to enjoy Christmas time,