Arriving in Kissimmee, still two days to go, checking in at a hotel because you cannot stay in the Villa you are buying, 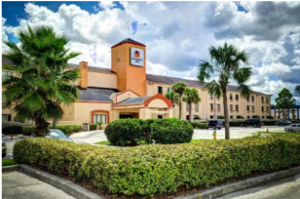 Finding the Villa among many other Villa’s was one thing because we had a “short” list of all the requirements.
We wanted the Pool to be on the south or south/West
It had to be screened in, with a big Lanai,
We liked it to be a two story Villa,
And it had to be fairly new and isolated with double glazed windows,
4 to 5 Bedrooms was a must and also the double Garage was a thing,
Last but not least we liked it to be with a preserve view, to ensure the potential guests of rest and relaxation.

But the administrative things and all the work that comes after that was the hard part.
Setting up the natural Gas and electricity we did by phone so that was easy enough,
and the only thing we could do from our home country.

Finding the Equity office was a challenge on its own, and to be there on time, off course we did take Orlando traffic for granted but as always, not that it takes forever to get somewhere when you are in a hurry.
Finally we arrived, after being late for five minutes,

Signing was pretty much straight forward, you put your signature down and that’s it….. we thought.

So much for signing, off to the many appointments that wait for those who buy.
First we went to the insurance company, because you don’t want your new property damaged before you have insured the property.

You might expect a big firm with a huge entrance, because after
all that’s what insurance company’s do but no, not this one, and we like it this way, it’s better to get a good price with a personal touch than a beautiful office.

After that, a visit to the Bank of Amerika to setup an account and all that comes with it.
We even got our own representative to handle our account and that was much appreciated because the banking world is a different one compared to the banking world in the Netherlands.
That didn’t took too long and before we knew it we were out again with again another step down on the to do list.

Last but not least setting up the Tv and internet account with Spectrum and off course this was on the other side of Orlando.

So finally finished and of to our own Villa on Watersong, but… did we forget something???
Wouldn’t Water be nice to have?
So we had to wait until we could try it ourselves by turning the knob in the Villa and see some running water or… not.
Fortunately the water wasn’t turned off, after trying it the water supply run and the thought of having a warm shower after a long day was really rewarding.

And then we realized we were home……